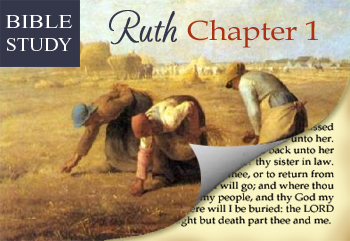 For the next four weeks we’ll be digging into the book of Ruth, exploring what it means to live a life of self-sacrifice and how the story of kinsman redemption relates to our lives today. Ruth is the only woman in the Bible referred as “virtuous” (3:11), and as we uncover some of those virtues, we’ll study them deeply. Ruth’s extraordinary devotion to her mother-in-law, Naomi, is an incredible love story between two women that offers us a pattern to follow in our lives.

Ruth, the grandmother of Jessie, and the great-grandmother of King David, was one of the five women listed in the genealogy of Christ along with Tamar, Rahab, Bathsheba, and Mary. The book was written between 1500-1600 B.C., and although the authorship is undetermined, Bible scholars commonly believe it was penned by Samuel.

The main characters within are all to be admired for their devotion to family and loving kindness one to another. I pray that during the next four weeks, the things we uncover will inspire us to reshape our character and vigorously pursue our kinsman redeemer, Jesus Christ.

Before you start this study, I want to ask that you bow for a moment in a word of prayer, asking God to prepare your heart for His Word.

People in the first chapter and the Hebrew meaning of their names:

We see in verse one that Elimelech and his wife Naomi took their two sons to live in the country of Moab. In studying this, it’s important that we understand who the Moabites were and why they were looked down upon by the Jews.

Moab was the son of Lot conceived by incest. In an attempt to preserve the seed of their father, Lot’s daughters caused him to get drunk, and without his knowledge they both conceived his children. The first born was Moab. Genesis 19:30-38

The book begins by telling us that a couple, of Jewish decent, Elimelech and Naomi, moved to the land of Moab with their two sons to escape the famine in Bethlehem-Judah. After their father died, the two sons married women of Moab.

Why do you think this union of marriage might have been looked down upon by the Israelites? Compare Deuteronomy 23:3-4 with Ruth 1:4.

What were the names of the two women they married?

What happened to the sons?

Why did Naomi leave Moab and return to Judah?

What reason did Naomi give in urging Orpah and Ruth to stay in Moab?
(verses 8-13)

To understand what Naomi meant in these verses, it’s important to understand the Jewish law and customs regarding widows.

If brethren dwell together, and one of them die, and have no child, the wife of the dead shall not marry without unto a stranger: her husband’s brother shall go in unto her, and take her to him to wife, and perform the duty of an husband’s brother unto her. ~ Deuteronomy 25:5

Naomi wanted the best for them including a future with a husband and children.

Which daughter-in-law stayed and which left?

The love and devotion that Naomi and her daughter-in-laws shared is an example to women of the devotion that we can share with our in-laws too.

Without a closer look at the underlying conflict between the two cultures, one might not fully understand that Ruth’s decision to stay with Naomi in verse 14 was an incredible sacrifice. Moving away from her people to live in a foreign land would limit her chances of finding a husband. It was commanded in their law that Israelites marry other Israelites, rather than seek out brides that serve pagan gods as the Moabites did. (Deuteronomy 7:2-3)

One of the most beautiful pieces of scripture is found in this chapter:

But Ruth replied, “Don’t urge me to leave you or to turn back from you. Where you go I will go, and where you stay I will stay. Your people will be my people and your God my God. Where you die I will die, and there I will be buried. May the LORD deal with me, be it ever so severely, if even death separates you and me. ~ Ruth 1:16-17

Becoming “one” with my husband means that his people became my people including every idiosyncrasy they might have. I love that even though my family is wonderfully-weird at times, my husband accepts them as his own flesh and blood. It’s one of the virtuous qualities that Ruth possessed and that we can own too. That doesn’t mean it’s necessarily going to be easy, in fact the decision that Ruth made to follow Naomi required a complete surrender of all that she was.

What five things did Ruth promise Naomi in her plead to follow?

What are some of the admirable character traits in both Ruth and Naomi?

When they arrived in Bethlehem, what did Naomi wish to be called? Why?

Naomi’s character typifies the Israelites that were exiled and eventually returned to their land, but we can also see that she typifies the life of a sinner that comes home.

Like the prodigal son, she went out full and came home empty again. (v.21)
She wasn’t worthy of her name. Nor was the prodigal son, “And the son said unto him, Father, I have sinned against heaven, and in thy sight, and am no more worthy to be called thy son.” Luke 15:21

The people welcomed her home. In the story of the prodigal son we read, “But the father said to his servants, Bring forth the best robe, and put it on him; and put a ring on his hand, and shoes on his feet.” Luke 15:22

It’s important to note that when God brings you into His fellowship you come to Him broken and lost. We are nothing without the grace of God.

Barley in its ripened stage is known as “Abib.”The month of Abib (referred to as Nisan after the captivity) represents a new biblical year for the Jews and the start of Passover.

It’s interesting to note the correlation between the arrival of Naomi and Ruth in Bethlehem and the Israelites’ freedom from Egypt, which are both marked by the Passover feast—again reinforcing the symbolism of Naomi typifying Israel.

Read the first chapter again with some of the lessons in mind.

« Serious Dater
How To Truly Hug Your Children »