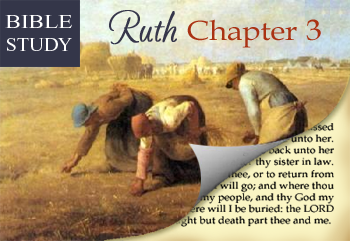 In verse one, Naomi said that she was seeking “rest” for Ruth. Since Ruth was a widow, it would be an ongoing concern for Ruth to earn a living and provide for herself even throughout her old age. It was customary that Jews would take care of their own, but even in those cases they had to be reminded by the leaders to do so:

But if any widow have children or nephews, let them learn first to shew piety at home, and to requite their parents: for that is good and acceptable before God. ~ 1 Timothy 1:4

Knowing that Boaz was related through Elimelech, Naomi seized the opportunity for Ruth to be his bride. With that hope in mind she instructed Ruth to approach him.

Verse two tells us that Boaz was winnowing barley in the threshing floor. Winnowing was a process of separating the wheat from the shaft. John the Baptist also used this analogy when he spoke of the coming Messiah:

Whose fan is in his hand, and he will thoroughly purge his floor, and gather his wheat into the garner; but he will burn up the chaff with unquenchable fire. ~ Matthew 3:12

What do you suppose John the Baptist meant in that verse?

The “fan” is a wind that was required in the process. Here’s a description of “winnowing” from Wikipedia.org:

[Winnowing] In its simplest form it involves throwing the mixture into the air so that the wind blows away the lighter chaff, while the heavier grains fall back down for recovery. Techniques included using a winnowing fan (a shaped basket shaken to raise the chaff) or using a tool (a winnowing fork) on a pile of harvested grain.

I’m digging deep into this chapter because I believe that the story of kinsman redemption found in the book of Ruth is symbolic to our relationship with Christ, and God’s redeeming love. It’s exciting to see just how much symbolism is used and how the events of this story line up with the harvests as discussed in lessons one and two.

I will greatly rejoice in the LORD, my soul shall be joyful in my God; for he hath clothed me with the garments of salvation, he hath covered me with the robe of righteousness, as a bridegroom decketh himself with ornaments, and as a bride adorneth herself with her jewels. ~ Isaiah 61:10

In what ways if any is this similar to a modern bride preparing for marriage?

Here we read that Ruth went to Boaz softy, uncovered his feet and lay down. There are conflicting theories as to why she uncovered his feet, and what exactly that meant. I believe that we can best understand it by comparing her actions to that of a humble servant. She was in essence bowing at his feet in an act of submission rather than assuming the right to his kinship.

When Ruth says, “Spread therefore thy skirt over thine handmaid,” to Boaz, it was the same as saying “spread your wing” or “take me under thy wing of protection.” Then Ruth adds “For thou art a near kinsman.”

“If brethren dwell together, and one of them die, and have no child, the wife of the dead shall not marry without unto a stranger: her husband’s brother shall go in unto her, and take her to him to wife, and perform the duty of an husband’s brother unto her. And it shall be, that the firstborn which she beareth shall succeed in the name of his brother which is dead, that his name be not put out of Israel. And if the man like not to take his brother’s wife, then let his brother’s wife go up to the gate unto the elders, and say, My husband’s brother refuseth to raise up unto his brother a name in Israel, he will not perform the duty of my husband’s brother. Then the elders of his city shall call him, and speak unto him: and if he stand to it, and say, I like not to take her; Then shall his brother’s wife come unto him in the presence of the elders, and loose his shoe from off his foot, and spit in his face, and shall answer and say, So shall it be done unto that man that will not build up his brother’s house. And his name shall be called in Israel, The house of him that hath his shoe loosed.” ~ Deuteronomy 25:5-10

The law of Kinsman Redemption is basically this. If a relative is sold as a servant to a stranger, the next of kin has a right to buy him back.

“And if a sojourner or stranger wax rich by thee, and thy brother that dwelleth by him wax poor, and sell himself unto the stranger or sojourner by thee, or to the stock of the stranger’s family: After that he is sold he may be redeemed again; one of his brethren may redeem him: Either his uncle, or his uncle’s son, may redeem him, or any that is nigh of kin unto him of his family may redeem him; or if he be able, he may redeem himself.” ~ Leviticus 25:47-49

What does the word “redeem” mean? (See www.dictionary.com)

How are we redeemed by Jesus Christ? Was it important that He was born of Jewish descent? Why or why not? (Compare Galatians 4:3-7)

Here we see that Boaz refers to Ruth as “virtuous.”

Why do you think that Boaz defined Ruth as a virtuous woman?

Boaz acknowledges his right of kinship, but points out that there is another man who is closer in relation to Naomi’s family. According to the law, this other relative would have to forego his right to the marriage first. (See reference to kinsman above).

In the morning, Boaz sends Ruth with a gift, which she carries in her veil.

Upon returning home, Naomi asks, “Who art thou, my daughter?” Was Ruth betrothed to Boaz or not? Naomi wanted to know.

After filling Naomi in on the details, she advised Ruth to leave it in the hands of Boaz. In the same way, we can rest knowing that our salvation is in the hands of Jesus Christ.

Read the third chapter again with some of the lessons in mind.