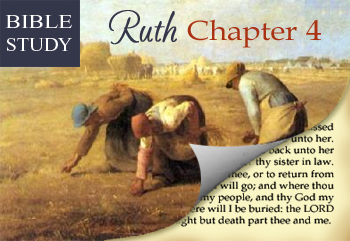 Names in this chapter (excluding the closing genealogy):

This chapter begins by telling us that Boaz went up to the gate. In scripture we often read about leaders sitting at the city gates, it’s similar to what we know as town hall meetings, a market place, and a court house. There was much activity at the city gates.

In verse two, Boaz took ten “elders” to witness the discussion, and hopefully, their transaction. In much the same way, a public confession of faith is a necessary step in living a victorious Christian life. Baptism is one way we do that.

What are some ways that you have publicly confessed your faith? Or haven’t you?

Boaz chose ten men. Yet it was required in the Jewish law that they required the witness of two or three. The only significance that I can see in his choice of ten is that of the Ten Commandments. The commandments, and our failure to keep them, prove our need for a kinsman redeemer. In a sense they bear witness to our sin. (we’ll discuss this a little more further down).

The word “brother” used in verse three likely refers to Elimelech being a close relative. It doesn’t necessarily mean “brother” as we know it.

Boaz states his intentions in front of the witnesses, offering the unnamed man first-right of redemption. Boaz offers the kinsman the right to purchase Elimelech’s land, but advises him that should he wish to purchase it, he must also take Ruth to be his wife so that Elimelech’s name would live on.

This is a key verse in the book of Ruth. Although this historical account is true, remember from our previous studies that Naomi represented Israel, Ruth represented the Gentiles who were grafted in to the faith, and Boaz represents Jesus Christ as our Kinsman Redeemer. It’s interesting to note that in this chapter we are introduced to an unknown next-of-kin who would seem to represent the old law.

“For what the law could not do, in that it was weak through the flesh, God sending his own Son in the likeness of sinful flesh, and for sin, condemned sin in the flesh.” ~ Romans 8:3

“Weak through the flesh” means that we are slaves to our sin (the Ten Commandments and our failure to keep them, bear witness to that), but when we are in Christ Jesus we walk after the Sprit and die to ourselves.

Buying the land was inviting, but marrying Ruth meant that he would also raise up the name of Elimelech and destroy his own inheritance.

Look at this scripture:

Thou knowest the commandments, Do not commit adultery, Do not kill, Do not steal, Do not bear false witness, Honour thy father and thy mother. And he [the rich young ruler] said, All these have I kept from my youth up. Now when Jesus heard these things, he said unto him, Yet lackest thou one thing: sell all that thou hast, and distribute unto the poor, and thou shalt have treasure in heaven: and come, follow me. And when he heard this, he was very sorrowful: for he was very rich. ~ Luke 18:20-23

In what ways, if any, are the near kinsman and the rich young ruler similar?

How might that piece of scripture from Luke relate to your walk with Christ?

You see the law and commandments were good—their purpose is to show us our need for a savior–but the new covenant requires us to give up our own desires to serve the Lord and raise up His name. That’s what being born again is all about. Our old life along with its passions and desires are gone, and we are born into a new life that seeks to serve God.

Being a moral citizen does not a Christian make. Desiring to serve God and live according to His wisdom sets us apart as Holy.

The kinsman in chapter four wasn’t ready to give of himself to become one with his people, and so he passed his right on to Boaz.

Removing one’s shoe was a custom in Israel as a public confirmation of transfer in the redemption process.

Boaz knew that there was a coming Messiah, born through the line of Judah (Genesis 49:10) and therefore it was his honor to carry on the lineage of his family, “That the name of the dead be not cut off from his brethren.” It’s this hope in the coming Messiah that was counted as faith in the Old Testament, whereas our hope is in Jesus Christ who came to redeem us and will come again.

Because of his faith, the witnesses blessed him, which came to pass since the Messiah was born through their blood line.

The “he” referred to in verse fifteen is the “Lord” mentioned in verse fourteen. God restored Naomi’s life in the sense that Boaz carried on the family name of Elimelech, and through his marriage to Ruth brought descendants to their family. The book of Ruth started out with the death of three men, but what was once death became life through kinsman redemption.

Consider the full study of Ruth. What are some of the many ways that Ruth was a blessing to Naomi?

When Naomi took the child and became “nurse” to it, let’s not confuse it with her with a wet nurse as we might see elsewhere in the Bible. The word “nurse” used here is ‘aman, Strong’s H539, which means to support, confirm, or be faithful.

The name given to their child was Obed, meaning servant. Obed begat Jesse, and Jesse begat David, King of Israel. It’s exciting to see that one who is called “servant” became grandfather to the King of Israel.

Read the fourth chapter again with some of the lessons in mind.

That closes our study on chapter four.

If you are studying along with us this week, you are welcome to leave a link to your site in the Linky tool below. But rather than linking up with a graphic from your blog like we usually do, it would be nice if you could post your profile photo so we can all see each other. If you don’t have one–not a problem, another graphic will do. The Linky tool is just a way for all of us to get to know each other, it’s not necessary to write a corresponding post.