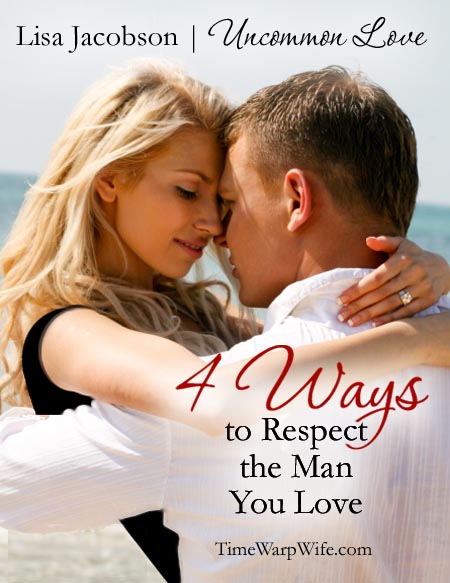 Continuing our series this week we’re on to step 4:
Respecting the Man that You Love
Guest contributor, Lisa Jacobson, Club 31 Women

I want to do the right thing.
And I want to be a good wife. So when I read in Scripture “Let the wife see that she respects her husband” (Eph.5:33), I’m determined to do that very thing.
Except that it seems rather vague to me. Undefined. I mean, how can you “see to” something you’re unsure of?
What does respect look like anyway?
I know what it looks like to love. But respect? That one is less clear, as it’s not something I particularly long for. It’s just not at the top of my list, if you know what I mean?
Apparently it’s at the top of his though. I’ve even heard it said that men would rather be unloved than disrespected—is that wild, or what?
Really?  Respect? That’s the key?
So maybe I don’t exactly “get it”, but I’ll take his word for it. Yet that still leaves me with wondering how to let him know that he’s respected. By me.
Does this mean that he makes all the decisions for our lives and I’m simply along for the ride?
Does it mean he leads in the Big Stuff – like finances, the children’s education, and where we spend Christmas? And I’m pretty much on my own after that?
Or is it something totally different than any of these?
A few years ago, after reading a book on the subject, I tried yet another of my experiments (do you ever feel a wee bit sorry for my husband?). I decided to become Super Wife and not question anything he ever said or did. This noble trial went on for several weeks and yet, in spite of my great effort, he didn’t seem to notice or care.
Nor did it appear to be all that effective—and it definitely wasn’t working for me. I finally broke down, confessed my game, and told him I was sorry, but that I didn’t think I could keep silent for the rest of our married lives.
And do you know how he responded?
He laughed! Yeah, laughed right at me.
Then informed me that he didn’t marry me so that I would only nod my head and say, “Yes, Honey” every time he opened his mouth. He actually highly valued my opinions and input. These were things he loved about me! This was NOT his definition of respect. (Whew!)
Yet the question still remained…
So I wrestled hard with this one. First, I had to look into my own heart. Did I truly respect him? Or, deep down, did I consider myself somewhat superior to him? An ugly thought, but it had to be faced. Did I trust my wisdom over his? Was I more “spiritually sensitive” than him? Was I more “in touch” with the children? More responsible? More practical? No, I definitely had some soul-searching to do.
Then what about when he’s not “respect-able”? That had to be considered—except Scripture doesn’t offer allowances for this. (Besides, I wouldn’t want him to love me only when I am “love-able”.)
My next step was to go to him and ask him outright how I could show more respect. His answer wasn’t as ready as I would have guessed. It was more of an ongoing conversation. While he could come up with a few examples, the others I had to figure out myself by careful study.
I’ll share a few of my conclusions—hoping you’ll keep in mind, just as my list of “what love looks like to me” is going to vary a bit from yours, so is your husband’s list going to vary from mine.

Today’s Challenge: Make a list of some ways in which you can show respect to your husband. Consider asking him what kinds of things make him feel respected?

Let the wife see that she respects her husband. Believe me, I’m wanting very much to “see to it” – how about you?
In fact, if you have some of your own special ways of showing respect, would you be willing to share them? I’m guessing we’d all love to hear it!

Will you seek the Lord in how you can show loving respect for your husband?

Lisa is the happily-ever-after wife of Matt Jacobson, literary agent and writer, and together they enjoy raising 8 children. Please join her over at Club31Women, a blog for any wife, mother, or sister who is looking for Biblical encouragement and inspiration.
Visit: Club31Women.com
Find her on facebook: Club31Women
If you would like to have Time-Warp Wife delivered to your inbox daily, simply click here: Subscribe to Time-Warp Wife
Would you like to share our button?
Here’s the code. 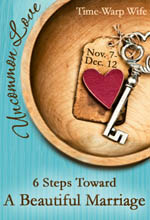