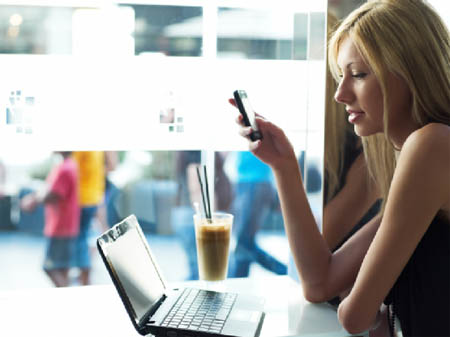 The other day I got to talking to a married friend and young mother who told me that she was recently approached by an ex-boyfriend who wrote her a heart-felt letter. If that isn’t temptation wrapped in a bow and handed to her on a silver platter, I don’t know what is. But I do know that this happens more often than women are willing to admit. Social networking has opened the door to behind-the-scenes communication and easy access to temptation unlike anything we’ve seen before.

She isn’t the only woman who recently told me this. The next day I heard a similar story–the names were changed, but the details and the storm of emotions she felt resembled that of the other. Satan knows our weak spot and too often it’s found in matters of the heart.

The initial temptation is an external one, but the lies we start to tell ourselves are internal, and that’s why we need to protect our thoughts before they become action that we live to regret.

Desiring a closer walk with the Lord, both women have made a conscious decision to turn their back on the past and move forward. Praise God for their faithfulness!

I got to thinking about the sacrifice that they’ve made and the reward that God gives to those who diligently seek Him with a pure heart.

For before he [Enoch] was taken, he was commended as one who pleased God. And without faith it is impossible to please God, because anyone who comes to him must believe that he exists and that he rewards those who earnestly seek him. ~ Hebrews 11:5b-6

I think it’s important to emphasize the words in verse six, “He rewards those…” so that we don’t seek our reward from this world. Let me explain…

We often hear of people who make decisions like this but later they start to question whether that decision was the right one or not. If you give up the chance to be with a handsome, charming man, then start to notice that your husband is really getting on your nerves or isn’t quite as attractive as he once was, you might ask yourself. “What is the point? I’ve given up so much, but I’ve received nothing in return.”

The problem with that scenario—if it should happen, and I pray that it doesn’t—is that we are looking to our husbands for our reward, not our Lord. GOD is the one who graciously rewards those who diligently seek Him, not this world.

A biblical account of this is found in Genesis chapter 39 where Joseph refused the advances of Potipher’s wife. Out of respect to his master and to God, Joseph fled temptation and left. As a result of his loyalty, he was imprisoned by Potipher himself. But notice this portion of scripture:

But while Joseph was there in the prison, the LORD was with him; he showed him kindness and granted him favor in the eyes of the prison warden. So the warden put Joseph in charge of all those held in the prison, and he was made responsible for all that was done there. The warden paid no attention to anything under Joseph’s care, because the LORD was with Joseph and gave him success in whatever he did. ~ Genesis 39:20b-23, NIV

See where I’m going with this? When we look for the praise of others we aren’t keen on sensing God’s presence. When our eyes are closed to the spiritual world, we don’t notice His favor upon us. And finally, when we look to the world for reward, we don’t see the gracious reward that the Lord is already placing before us.

While we’re all dealing with differing temptations in our life. Let’s look at five ways we can resist it:

Print
« 31 Ways to Inspire Your Children
Friday Five! May 25th »