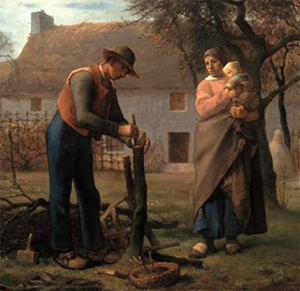 There is always the danger that we may just do the work for the sake of the work. This is where the respect and the love and the devotion come in – that we do it to God, to Christ, and that’s why we try to do it as beautifully as possible.
~ Mother Teresa
I encourage women to change themselves rather than attempting to change their husbands. On the flip side, it’s only fair that our husbands change and meet us halfway, isn’t it?

Of course it is, but I’m not talking about “fairness” here, I’m talking about a love that reflects the goodness of God. Could there be any greater love?

But God demonstrates his own love for us in this:
While we were still sinners, Christ died for us.
~ Romans 5:8, NIV

When a husband doesn’t feel a certain level of love and respect from his family, he may seek out other ways to find it. He may absorb himself in his work thinking that success equals respect, get involved in sports to gain the respect of his peers, or find that respect in another woman who sees him the way he desires to be seen.

When a wife stops fulfilling her husband’s need for respect, the void creates a vacuum that must–and will–be filled by other things. This is why it’s so important that our attitude is one of adoration, and that our attitude stays in check.

We can start showing respect by accepting without expecting. Pressure does little more than create resentment and rebellion, while reverence and a good attitude create an atmosphere of trust.

I had a friend once with beautiful children who were a joy to watch. Even the baby was a cheerful little fellow who was content to coo and caw while I puttered around the house. I enjoyed babysitting those kids until I started to feel that my friend was pressuring me anytime I busy and had to say no.

When I sensed the pressure, I declined to test my boundaries, and sure enough the pressure built up. The more evident her pressure became, the more resentful I was, and so I started to decline all the more often. It’s not like I set out to keep score, it was more of a subconscious reaction to the fact that I was feeling unappreciated. Instead of communicating my thoughts, I rebelled with my actions until we both stepped back from the friendship.

That’s the affect that pressure often has. We either live in a constant state of guilt, we give in reluctantly, or we step back. While pressure doesn’t get us anywhere in changing a person, a good example and friendly encouragement goes a long way.

When approaching our husbands we can look to the Biblical example of Esther, a woman who used wisdom and reference when she came to the king with her burden. In Esther chapter five we see that when Esther entered the king’s court she didn’t burden him with her petition. She showed respect without expectation, and in doing so received her husband’s respect in return.

True love is giving without expecting return. It doesn’t keep track of wrong doings. It doesn’t expect perfection, and allows room for fault. It plants gardens where brick walls have once stood. True love is painful and pleasant, while perfect in every way. It’s grace in action.