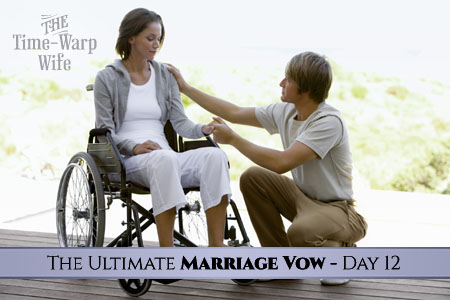 I had just stepped into the hallway when I saw it. One of the most beautiful things one could see–the undying love between a man and his wife.

Dad had been sick for some time already, and the cancer reduced him to about 85 pounds. Looking at him, I wondered if his transparent skin was the only thing left that held him together. He was too weak to sit up without being lifted, and up until two weeks before he passed on, Mom was his sole caregiver, waiting on him both night and day.

The evening we saw her stumbling to help him into his wheelchair, was the night that my sisters and I knew it was time we stepped up. Taking shifts we stayed by his bedside around the clock. Two of us would take the night shift while our mom got some sleep, not only because he was difficult to lift but also because we needed to keep one eye on his bed at all times.

Dad was stubborn when it came to the bathroom. He insisted on getting out of bed and if we weren’t awake he’d start the descent on his own. I can’t tell you how terrified I was that he might fall on the floor. Seriously–at 85 pounds (probably less by this time), he was as frail as a person can possibly be.

With six daughter popping in and out of the house, we spent our afternoons talking, visiting him and helping our mom around the house. But it wasn’t until I spent the night there that I realized the extent of what she’d been going through in recent weeks. Keeping him at home instead of having him stay at the hospital was an incredible sacrifice for anyone, never mind the fact that she was eighty-years-old.

But serve him she did, and joyfully. She’s always been good at taking care of the family when any of us came down with a cold or a flu; I can’t imagine having a better nurse than her.

Pulling her close, he looked at her the same way you look at someone when you’re about to have your first kiss, and it was obvious to me that they were still as hopelessly in love as the day that they met.

Waving my hand, I motioned my sisters to witness this beautiful sight. And while the three of us looked in from the hallway, we captured their moment and tucked it away in our hearts. Love, 60 years in the making.

Two are better than one; because they have a good reward for their labour. For if they fall, the one will lift up his fellow: but woe to him that is alone when he falleth; for he hath not another to help him up. – Ecclesiastes 4:9&10

Today’s Vow: To Walk Through This Life With You

The Challenge: If your husband is sick, troubled or weary be a companion that remains by his side. And if not? If all is going well in your lives? Praise God for the blessings upon you.