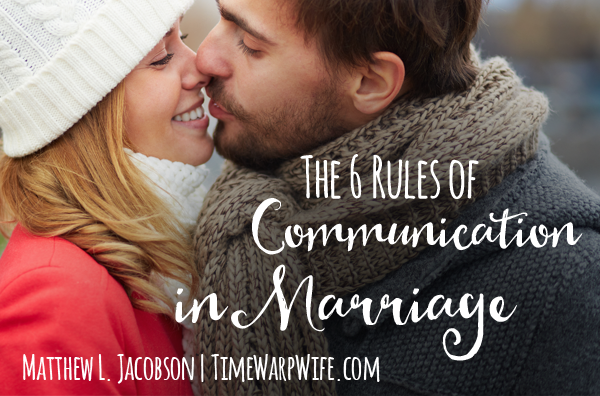 It wasn’t exactly sound advice but, you had to admit, he had a point. The older gentleman leaned across the table and said,

“I learned a long time ago, when you’re having a disagreement with your wife, as soon as you are convinced you’re 100 percent correct, apologize immediately!

There’d be a lot fewer arguments in marriage if this advice was followed, wouldn’t there?

But, is that what God would have you do . . . cave immediately to keep the peace? No, that is never a long-term solution. Stuffing what you think and feel now will only lead to a destructive explosion down the road.

Disagreements are inevitable. After all, this is marriage! So, how do we have an honest disagreement without it escalating into a full-scale war, dishonoring ourselves, damaging our relationship, and diminishing our testimony as followers of Jesus Christ?

Everything in life operates on a set of rules: Growing a garden, playing football, landing an airplane, downhill skiing, driving a car . . . it doesn’t matter. Whatever it is, ignore the rules and you’re going to have a mess on your hands.

It’s the same for dealing with disagreements with your spouse. Freewheeling, no-boundaries arguments may release pressure like a bursting dam but destruction always follows.


But he makes me so angry, sometimes!


Did you know God is totally good with anger? That’s right, He is. You can’t read the Old or the New Testaments without encountering many things that make God angry. Anger is a legitimate emotion and, He knows we’re going to experience that emotion at times, as well. God’s way is always better. He says, be angry and don’t sin. Don’t let the sun go down on your wrath (Eph. 4:26.) He also says, be quick to hear, slow to speak, and slow to anger (Jas. 1:19). This is anger under the control of the Holy Spirit.

Here are some practical “rules” to consider for the next time you feel the temperature rising:

Lisa and I disagree at times . . . and, why wouldn’t we? She chooses to be wrong sometimes! Okay, I’m joking but, we have discussed these things in advance and agreed how we would handle disagreements before they arise. This has greatly helped us in hearing each other and working through those difficult times – that are inevitable – even in the best marriages.
Matthew L. Jacobson

Matthew Jacobson has been in the book publishing industry for 22 years and is currently the president of Loyal Arts Literary Agency. For the last 10 years, he’s served as a teaching elder in his local Church. Matt and his beautiful bride of 21 years, Lisa, raise their 8 children in the Pacific NW. You can join him at his blog by clicking here:
MatthewLJacobson.com or find Matthew on facebook.

« Titus 2sDay Link-Up Party
A Virtuous Life: The Beauty of a Persistent and Diligent Wife »