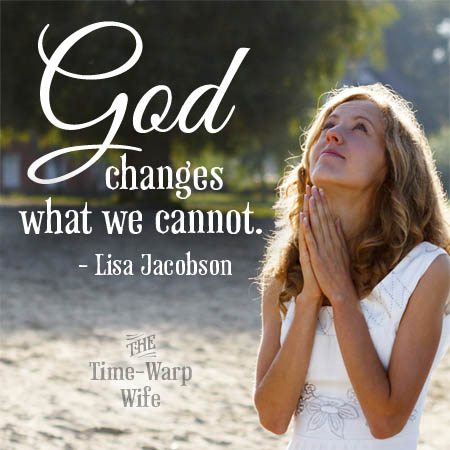 He wasn’t about to budge. That much was evident.

I could see it in his eyes. Could tell by his body language. My husband was in his Brick-Wall-Mode and he wasn’t moving.
All I’d done was ask him to change – only change this one thing that bothered me greatly – and yet he was rather closed to the idea. Completely closed, in fact. I’m not even sure if he was listening.
What to do now?
That’s what I was left wondering. Because I sure wanted him to do it differently.
I figured I had options. I might resort to crying, yelling, whining, pouting or maybe some serious nagging—although I’d have to admit I’ve never had much success with any of those approaches. Nor could I find any support for it in the Bible. No, I would have to come up with a better plan.
So with a big, heavy sigh, I began praying.
Not a stiff, formal prayer, but a pour-your-heart-out and a Lord-You-made-this-man-so-now-what? kind of prayer. I bet you know the kind I’m talking about.
And then I waited. Prayed some more. Waited and waited and waited.
Still nothing.
Then I did what came naturally – I gave up. And our life continued on as usual.
Until one day while I was chopping vegetables in the kitchen, he walked by me and dropped a simple remark. It went something like this, “You know that thing that was bugging you? Well, I’ve decided I’m not going to do it anymore.” And that was that.
Can you believe it?? That beloved Brick Wall of Mine had moved after all.
I didn’t say anything, but continued dicing the onions. With tears streaming down my cheeks. Silly onions – what they’ll do to a woman.
God had changed what I could not.
He had heard my prayers and He’d been working all along. I just couldn’t see it.
And that might be where you’re at right now. In that waiting and praying and waiting place.  Maybe it’s something really big, or maybe only a tiny matter. But either way, it’s a blessing and a comfort to bring it all before The Lord and know that He’s listening. He is always listening.
The Power of Prayer in Our Marriage
Sometimes God has the most marvelous ways of answering our prayers. I’ve witnessed some lovely miracles. Seen Him reverse many seemingly impossible situations.  He’s our loving Redeemer who cares for us.
Sometimes He holds off His answer for a long time. Longer than we’d like. But don’t give up (like I did – oh, me of little faith). Keep bringing your cares and concerns before The Lord.
Sometimes the work God wants to do is in US – and not the other person. More than once, it’s turned out that I was the one who needed to change – much to my great surprise – when I was so certain that he was the one with the problem. So be willing, even desiring, for Him to do His work in you too.

Be anxious for nothing, but in everything by prayer and supplication, with thanksgiving, let your requests be made known to God; and the peace of God, which surpasses all understanding, will guard your hearts and minds through Christ Jesus (Phil.4:6-7).

So the best move you can make in your marriage?
Pray.
Pray for him. Pray for you. Ask God to do His mighty work in your marriage. Thank Him for what He’s already doing – where you can see it and even where you can’t just yet.
Because if He can move mountains? Then he can move brick walls.
I know. I’ve watched Him move mine.
Even watched Him move me.
Thank you, Lord.
He is doing a good work in us.

…being confident of this very thing, that He who has begun a good work in you will complete it until the day of Jesus Christ (Phil. 1:6).

Lisa is the happily-ever-after wife of Matt Jacobson, literary agent and writer, and together they enjoy raising 8 children. Please join her over at Club31Women, a blog for any wife, mother, or sister who is looking for Biblical encouragement and inspiration.
Visit: Club31Women.com
Find her on facebook: Club31Women
Visit Time-Warp Wife on facebook: Click here

Check out Darlene’s book, The Good Wife’s Guide: Embracing Your Role as a Help Meet