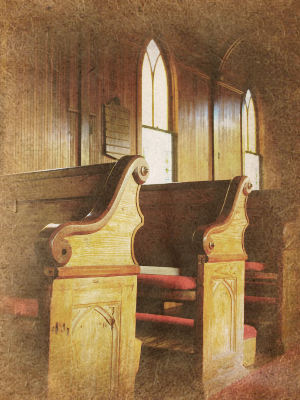 It was a cold night in December–New Year’s Eve to be exact. The front lobby was small but the warmth of its red carpet ushered us in from the cold. A series of pictures hung on the wall in dollar-store frames, each depicting a humorous baby of sorts. Nothing fancy, just one little chapel doing its best to welcome each guest.

A little man, barely taller than I, noticed us from across the room, while I couldn’t help but notice him. Brown pants, suspenders, matching bow tie, a dress shirt, and the most genuine smile, clothed a man I would grow to admire almost as much as my dad. Doing his best to cross the room, he limped with hand outstretched.

There was something about his eyes that I hadn’t seen before, or have I ever seen since. Within them was the God-given ability to connect with each person he met. At thirteen years old I would guestimate that he was 152. His skin was well worn, his eye sight was poor, and his limp told me he had walked 1,000 miles in his life. The soft tone of his voice and the way he lowered his chin when he smiled revealed a humbleness of nature one only hopes to attain.

His wife was the typical grandma—silver hair that was carefully rolled, thin lips that curled up when she smiled, a round face, sturdy beige nylons, one smart pair of shoes, and a stature nearly as round as her height. They were the kind of couple you wanted to place in the center of your table and fill with salt and pepper.

This was all new to me—new to us as a family. Vintage babies adorning the walls, hands outstretched at the door, people mingling, others smiling… Could it be that we were finally home?

Everyone was sent to the basement where we joined a group of about 25 people, who would later come to be known as my original church family. It didn’t matter if we were black or white, old or young, rich or poor, we were a family that night, and although many of us have gone separate ways, we still are today.

It was 1978, and I can still remember the beautiful lady in the Big Bird jeans. She was Rita Hayworth with much cooler pants, and to this day remains my big sister sans the cool pants. For years I attended a group in her home where I was taught the basics of the Bible and responsibilities like bringing the chips.

The pastor was unlike any other I’d seen or heard—tall and handsome with a smile so bright it lit up Sunday mornings like the fourth of July. Giving us reason to celebrate, his deep voice rang through the chapel and together we sang hymns of praise.

We attended that church for the rest of my teen years and into my early adulthood. Although I don’t attend anymore I know that stepping through those doors that night was a pivotal point in my childhood that greatly influenced who I am today.

Many people have come and gone through my life over the years. As iron sharpens iron, they have watered and nurtured my growth, but none have had the ability to affect my root system the way that family once did.

Because of the value these people have been to my life, it is my hope that today’s church offers the same value to the young people who step through their doors. As Jesus said in Matthew 12, “”Who is my mother? and who are my brethren?” can we be the family they need? Can we be their grandparent, their mother, their father, their sister, or friend in the Lord? I pray that I can, and I know you can too.

Blessed is the man who does not walk in the counsel of the wicked or stand in the way of sinners or sit in the seat of mockers. But his delight is in the law of the LORD, and on his law he meditates day and night.

He is like a tree planted by streams of water, which yields its fruit in season and whose leaf does not wither. Whatever he does prospers. ~ Psalm 1:1-3, (NIV)

« Don’t Waste the Rain
Finally Getting It »