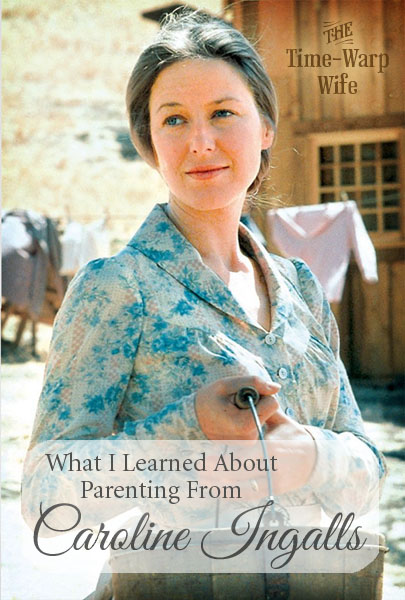 It was the second episode in the series, and possibly my favorite one of them all. Mary and Laura had just moved to Walnut Grove. Everything was new to them including the little school house that doubled as a chapel on Sundays. Hoping to fit into the crowd, the girl’s were met with an obstacle clothed in a bright yellow dress and blonde ringlets. It was her mission to make their lives miserable, and so she attempted to do so, time and again.

Growing up, I read all the books. But since I tuned into the show year after year it’s fair to say that it had a bigger impact on me than the books did. My vision of Caroline Ingalls will always be Karen Grassle, the woman behind the apron that made their house a home.

Years later, I still sit down to watch the show, but some things have changed. I’m watching with my own kids, and I’m seeing things from a different perspective. Little did I know back then that while I was watching this show I was gleaning important lessons on parenting. Since I was such a big fan, I suspect that these lessons have in part affected the way that I parent my children.

Here are just a few of the lessons I gleaned from the episode, “Country Girls”

Her smile was the first thing they saw in the morning, and the last thing they saw at night. I had never realized just how much she smiled, until now. It’s a beautiful site to behold. I don’t think I smile enough, but I’m still working on that.

She often reminded them of God’s will. I’m warmly amazed to see that so much scripture is used in a television show. The theme of the episode was “Do unto others…” and she repeated it often. She also said things like, “We don’t stop learning until God calls us home.” Scripture is so important, and it needs to be a part of our every day language.

She was engaged with her children. At the beginning of the episode, they show her busy in the kitchen. She pull buns out of the oven and shows them to Carrie. After putting the buns down to cool Caroline whisks the child up in her arms in a playful manner. I also loved the way that she talked to Mary and Laura. Being at least as busy–probably busier than most of us are–she stopped what she was doing to offer direct eye contact. She was constantly offering them physical affection by placing a hand on their shoulder, giving them a hug, or holding their hands.

She was humble. When Charles made a remark about her beauty, she humbly replied, “Oh, Charles,” and tossed her head to the side in such a beautiful fashion. Later in the episode the family remarks about how much she deserves a new dress because she never gets anything new. So humbled by their kindness, she breaks out in tears.

She wasn’t perfect, but was willing to grow. In this episode she has a run in with Harriet Oleson, the woman who owns the mercantile shop. Caroline’s pride gets the better of her and she purchases fabric out of spite. Later that night she confesses to Charles, “Pride goeth before destruction.”

She sacrificed for her family. Charles wakes up in the middle of the night and notices that Caroline isn’t in bed. Confused he looks over to the kitchen, just as she peeks her head around the corner. She assures him that she’s taking care of something and will be in bed shortly. Once the children wake up in the morning, we discover that Caroline took the new fabric she had purchase for her dress and made dresses for her daughters instead. “And why not?” she said, “My brown dress is perfectly good.”

Now before any of you point out the fact that she’s an actress and nobody is really this awesome all of the time, let me clarify that I’m aware of that. Real life doesn’t offer us the privilege of scriptwriters, editing, or great camera angles. However we do have the opportunity to make each day better than the last.

What I’m sharing here are some characteristics of parenting that sharpen me and encourage me to be the best mom I can be. All children deserve our love and attention. We might not do it perfectly well, and we aren’t expected to, but can accept the challenge to grow, and to be perfected by faith.

I think Caroline Ingalls would agree with that.

I’d love to hear from you. What are some of your favorite “Little House on the Prairie” moments?

Print
« Free Printable – The Proverbs 31 Woman
Women of the Bible: Lessons from Hannah »